California Power of Attorney Forms make it possible for a resident to assign an agent to represent them in matters concerning finances, healthcare, guardianship, and vehicle registration. Each document can be completed in its entirety to clearly define the relationship between the principal (the individual requiring representation) and the agent (the representative). Most documents will describe the extent of the scope of the agent’s powers, the effective date of the document, the conditions by which the agent must operate, and the manner in which the agreement can be revoked.

The California durable power of attorney allows a person to authorize someone else to handle monetary decisions on their behalf. The agreement will provide clarity in what tasks the agent will be able to undertake while clearly defining the durable nature of the legal document; that is, the fact that the powers granted to the agent will remain effective even if the principal becomes disabled… 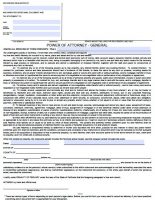 The California general power of attorney form serves the same function as a general durable power of attorney form only the powers granted to the agent become voided if the person being represented becomes incapacitated (mentally or physically). Until such a point, the agent will be able to handle the finances of the principal keeping the latter party’s best interests in mind for the duration…

The California guardianship power of attorney form is used to nominate a short-term guardian for one or more minor children. The form empowers the guardian with parental rights to care for the child(ren) and make decisions regarding their health care and education. California law has no specific limitation on how long this type of guardianship may last, though it will generally be a temporary appointment ranging… 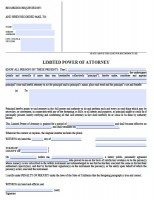 The California limited power of attorney form, otherwise known as a “specific” power of attorney, allows a resident of the state to designate an agent to take care of a specific financial matter on their behalf. The matter can be as small as picking up a car to as big as selling or buying real estate. Most of the time, when the task for which… 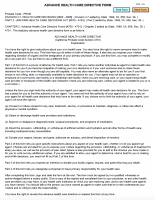 The California medical power of attorney, also known as an “Advance Directive”, is used to represent another’s health care decisions in a situation where a person may not be able to represent themselves. In addition, there is a portion called a living will that allows the principal to choose life-ending procedure options (such as withholding mechanical respirators or the intake of food and liquids). The…

The California real estate power of attorney form is a template with which individuals can name an attorney-in-fact to handle certain real estate matters. The creator of the document (principal) can choose to give their agent all powers relating to their current or future property holdings or they can grant them a specific task to complete within a certain time period. This power of attorney… 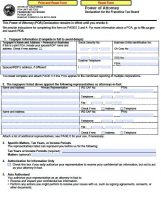 The California tax power of attorney form (Form 3520) is used to allow someone else (mostly accountants) to handle another’s State income tax filing. For all federal filings, a U.S. citizen will need to download and complete, in its entirety, the IRS 2848 form. It should be noted that the individual being represented is responsible for any inaccuracies and is held accountable despite the representative’s… 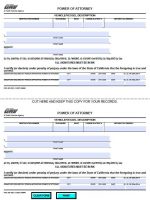 The California vehicle power of attorney form, also referred to as the DMV Form REG-260, permits an owner of a vehicle or vessel located in California to choose an agent to handle a transfer of ownership. The document does not need to be witnessed or notarized to be legally enforceable. Once signed and completed, the agent selected has the full rights to act in the…