Your Power of Attorney Document is Attached

A Louisiana general power of attorney form is one that can be used to transfer unlimited financial powers to an agent. The principal, the person creating the form, must complete the document in its entirety and the agent must accept the position in order for the transfer to be considered valid. In Louisiana, these documents are often referred to as a “procuration in Louisiana” or a “mandate,” but the function is generally the same as a power of attorney in other states; they grant an agent the authority necessary to represent a resident as if they were there to represent themselves. The powers bestowed on the selected representative will terminate upon the creation of a new power of attorney document, the creation of a revocation document, or the principal’s incapacitation. 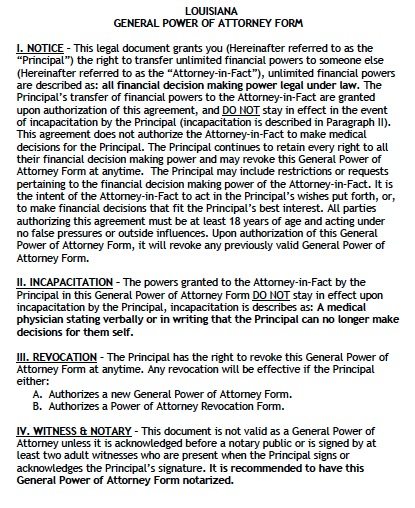 Are you happy with your FREE Form?

Please leave a review below: